Today was Gremlin #2’s birthday party. Just a small family deal – nothing big – and a couple friends. He picked an army theme (he’s four), because army dudes are cool and he loves to play army men with his dad. So I ordered his cake from the local grocery store. They *of course* didn’t have anything army-ish, but I gave the decorator one of his invitations and she assured me they could do something in camouflage colors and that they’d make four frosting mountains all over the cake so we could position army men on the top ourselves. Sounded good to me.

And then I saw the cake: 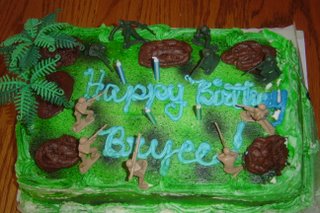 Now, tell me. Do those oblong brown things look like mountains to you???

The adults were sitting at the table eating lunch, and the cake was in the center. My SIL leaned over and said, “Um, Elisabeth? Where are your dogs? And just, out of curiosity, what is that on the cake??? Because it looks like something that should be out in the yard.”

Yes, Gremlin #2’s cake had shit-mountains. Luckily, he could have cared less, but it was a little less-than appetizing for me.

And did you see it’s in two different shades of blue? On the way out of the store the clerk stuck the cake on the bottom of my grocery cart. I loaded the groceries in the car, pushed the cart back to the cart corral and then jammed it into the cart in front of me. When it didn’t go in, I jammed it again and THEN realized the cake was still at the bottom of the cart. Eeek! They had to redecorate half of it because I’m a moron.

I think I need a Corona.