Happy Saturday! I’m still having some computer issues – grrrrrrrr – and didn’t have time to work them out this week so my blogging was nil. Right now I’m on the netbook so I can post this fabulous Saturday Snippet.

Today’s topic is Black Moments. I admit, I’m a sucker a deep, dark, emotional black moment. I love them! The more emotional, the better!

This one comes from my May release, MARKED. It’s not THE black moment(that would give too much away!), but it’s the lead-in to it. I hope you enjoy! 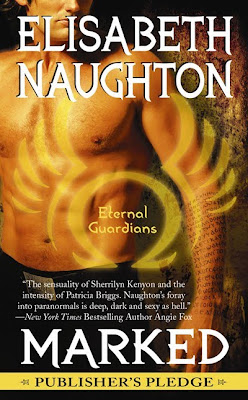 Theron stared at the ceiling long after Acacia fell asleep. Gods, he liked this. Way too much. Her, here in his bed. Hidden away from the world. Warm and snug and his.

His. There was a word. The irony was like a knife to the stomach.

He rolled to his side so he could watch her sleep and knew they didn’t have long. The king had probably already called the rest of the Argonauts together. What he’d said in the king’s chambers—with Zander as a witness—would be considered treason. He fully expected one of his kin to come charging in at any moment and drag him away.

He could hear their discussion now. Cerek the peacemaker would convince the rest not to take action until the morning. They’d come at first dawn. Play to Theron’s sense of honor. If that didn’t work, Gryphon would crack a joke about getting the king good, in a lame attempt to lighten the mood. Zander wouldn’t care one way or the other— so long as what happened to Theron didn’t affect him. And Demetrius . . . yeah, Demetrius would be pushing to have Theron hanged.

Too late, Theron realized he’d never told his Argonauts how much he respected them. Though they served together, fought together, none of them were close. And as he looked down at Casey, sleeping on her stomach with both arms tucked under her, her face tipped his way and one of her legs intertwined with his, he realized he’d never even thought of his Argonauts as separate individuals before. To him, they’d always been nothing more than fighters in a war they’d all been trained for. But now?

Now it was as if his eyes had been opened.

He brushed a finger down Acacia’s cheek, watched her back rise and fall in deep sleep. Studied the way her lashes formed spiky crescent shapes on her pale cheeks. Her courage still awed him. Last night she’d been ready to take him on. There was no other female in the universe who would dare stand up to him when he was in one of his moods, but it hadn’t stopped her. She was fearless. And as selfless as he’d told the king. Everything he’d never wanted but now couldn’t imagine living without.

He’d known she was his from the first taste. Long before he’d ever slid deep inside her. If he’d been more in tune with his humanity, he would have recognized it the first time he’d kissed her back in her small house. But he hadn’t. Because he’d needed her to unlock that side of him he’d always repressed.

She was his curse. His soul mate. His life. And there wasn’t a damn thing he could do to keep her from dying.

His finger ran down her shoulder, over her back until he found the sheet covering her gorgeous ass. He gripped the cotton and pulled it down, then eased up on an elbow and looked at her marking.

Gods, it was fading. In a matter of days, it would be gone.

His chest squeezed tight, and though he wanted nothing more than to slide back inside her and wake her from the inside out, he knew he couldn’t. Shouldn’t. She needed to save her strength, not use it up pleasuring him.

One glance at the window told him the moon was setting and morning would be here soon. Careful, so as not to wake her, he pulled the covers up around her shoulders and headed for the shower. Her scent all over his body was distracting and arousing at the same time. As he lathered and rinsed under the hot spray, he told himself he was doing the right thing. The king had been correct on one count. Sometimes a great sacrifice is necessary.

He cut the water, grabbed a towel and dried his hair. After toweling off his legs, he pulled on new jeans, lifted the terry to his shoulders and froze.

Someone was outside on his porch.

Skata, he’d been wrong. They’d come for him already.

A deep male voice echoed through the closed doors. Followed by Acacia’s surprised and wary one.

No. He was wrong. They’d come for her.