​A town nestled among rolling hill​s and painted with vibrant wildflowers, ​where everything ​seems like perfection.

But there are secrets beneath the facade.

Dark and ​powerful secrets. The kind that can destroy lives and tear families apart. ​That can cut through a town like a tempest, leaving jealousy and destruction in its wake, along with shattered hopes and broken dreams.

Get ready. The storm is coming.

Lacey Salt’s world shattered with the death of her brother, and now the usually sweet-tempered girl is determined to take back some control—even if that means sabotaging her best friend, Mallory, and Mallory’s new boyfriend, Luis. 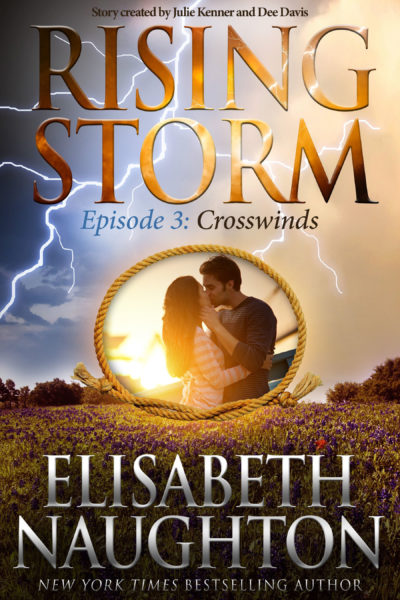 ​A town nestled among rolling hill​s and painted with vibrant wildflowers, ​where everything ​seems like perfection.

But there are secrets beneath the facade.

Dark and ​powerful secrets. The kind that can destroy lives and tear families apart. ​That can cut through a town like a tempest, leaving jealousy and destruction in its wake, along with shattered hopes and broken dreams.

Get ready. The storm is coming.

Lacey Salt’s world shattered with the death of her brother, and now the usually sweet-tempered girl is determined to take back some control—even if that means sabotaging her best friend, Mallory, and Mallory’s new boyfriend, Luis.

The deep male voice jolted Lacey out of her thoughts. She looked to her left where Luis sat on the edge of the empty chaise beside her in his sexy red lifeguard shorts.

“You into rap now?” he asked leaning forward to rest tan, muscular arms on his knees.

She blinked against the blinding sun. Or maybe it was Luis’s thousand-watt smile. He’d always been a good-looking guy, but his face had changed over the last year until it was now chiseled and just plain hot. “Huh?”

He pointed toward her phone, and his dark, curly hair, longer than he’d worn it before, brushed his jaw in a way that reminded her of Kit Harington, that super hot hunk from Game of Thrones. “Ludacris.”

Slowly, her gaze shifted to her phone, and she realized she’d jumped to another celeb’s social media page. But all she could see in her mind was Luis’s carved abs, those strong shoulders, and the way his swim trunks hovered dangerously low, accentuating the carved V of his hip bones.

He’s your best friend’s boyfriend. What the hell are you thinking?

Frustrated with everyone, including herself, Lacey huffed and sat up straighter. “Not on purpose. I must have switched pages when I was plotting ways to throw that brat into the deep end.”

Luis chuckled, and the sound sent butterflies fluttering in Lacey’s belly. Butterflies that threw her completely off balance. “I couldn’t let you do that. Gotta guard the lives and all that. That’s why they pay me the big bucks.”

Geez. What the heck was wrong with her? She’d been friends with Luis for years. Had heard him laugh a hundred times. And she’d never responded to him this way. Maybe she had heat stroke.

“I thought you were working,” she said, trying to get him to leave her alone so she didn’t have to look at his dark eyes that were way too cute. She reached for the sunscreen she’d set on the end of her chaise.

“My shift’s over. So you’re coming tonight, right?”

She squirted a dollop of sunscreen onto her palm. “Coming where?”

“My place. We planned this like a week ago, remember? The Grudge comes on at nine so don’t be late. Marisol said she’d clear out so we could watch without her constant chatter.”

“Ugh.” Marisol was Luis’s older sister and guardian. She’d been taking care of Luis ever since his parents had died when he was in grade school. Lacey liked Marisol, but still. She frowned at Luis as she rubbed lotion all over her legs. “You know I hate those kind of movies.”

“This one’s good. Trust me. And if you get scared, I’ll protect you.”

Her hand paused on her calf, and another flock of butterflies flittered through her belly.

Those wings came to a stuttering stop. Jeffry Rush had been running with Luis for years, and Lacey liked him, but she’d never thought of him as anything more than a friend. Sure, he was a good-looking guy too—dark blond hair, lean athletic body, and rich brown eyes like his father the senator—but he didn’t make her heart beat faster.

Unease spread through her belly as she rubbed her legs a little harder. “I don’t know.”

“Come on, Lace. Don’t say no. Mallory needs this. Things are tough at home for her right now. She needs a night where we all hang out like old times. No pressure, no stress, just us.”

Us… Images rippled through Lacey’s mind, but they had nothing to do with the four of them. No, the images she saw were filled only with her and the guy beside her. Alone. Together.

“I-I don’t know.” Mortification burned through Lacey. Mallory was her best friend, and she was struggling with the fact her dad had just walked out on her family. But besides that, she and Luis were an item, and Lacey was sitting here having fantasies about Mallory’s boyfriend? God, she was sick. The need to run pushed her out of the chaise. She shoved the sunscreen into the bag at her feet, then grabbed the towel from the back of her chair. “We’ll see. I gotta go.”

She made it three steps across the pool deck before Luis caught her by the arm. “Hey, wait.”

Oh, man. His hand on her bare skin felt good. Really good. She’d seriously had too much sun. “What now?”

“Listen.” He turned her to face him, but he didn’t let go of her arm. And she didn’t pull away when she knew she should because his touch sent little tingles over her skin that she liked way too much. “I’m a jerk, okay? I didn’t mean to imply that things aren’t rough for you right now. I know they are. I know you miss Jacob and that it can’t be easy having my sister living in your house. God, I just…” He sighed and looked out over the pool, pain etching lines into his face no sixteen-year-old boy should have. “It’s rough for all of us. The whole thing just sucks.”

It did. He was right. But she knew he wasn’t just talking about what had happened to Jacob. He was remembering back. To the day his parents had died in that wreck. He’d just been a kid then, but Jacob’s death, in such a similar way, had to be bringing it all back up for him.

Did Mallory see that? Probably not. Lacey loved Mallory like a sister, but Mallory took Luis for granted. They’d only started dating a few months ago when Mallory had asked Luis to the spring dance, and Mallory never fawned over him the way most new girlfriends did. Lacey wasn’t even sure Mallory really liked Luis the way a girlfriend should. In fact, if it weren’t for Lacey, the two wouldn’t even be together. Lacey was the one who’d pointed out how good-looking Luis was getting. Mallory hadn’t even been interested in him until then.

“Look,” Luis said, meeting her gaze, his dark eyes filled with so much compassion those butterflies took off all over again. “I just want you to be there tonight, okay? I think it would be good for all of us.”
Man, he had great eyes. Dark brown irises and crazy long lashes. Those were the kind of eyes a girl could get lost in forever. And his lips were full and, she bet, super soft. What would he do if she rose to her toes and kissed him right here?

Luis squeezed her arm, and the pressure was like a jolt back to reality. Looking quickly away, Lacey realized what she’d just been about to do. Heat swept up her cheeks, and the need to flee overwhelmed her.

“I… I’ll see.” She tugged her arm from his grip before he could stop her, tossed her bag over her shoulder, and rushed for the building.

Alone in her car, Lacey gripped the steering wheel in both hands and drew in a shaky breath. Holy crap. She’d almost put the moves on her best friend’s boyfriend. She was losing it. Seriously losing it.


Listen to a sample:

Other Books in the Rising Storm series
Click on the covers to read more. 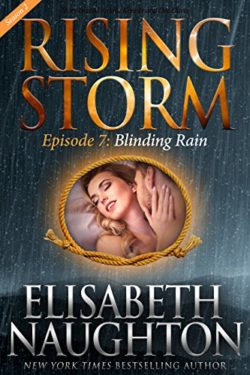 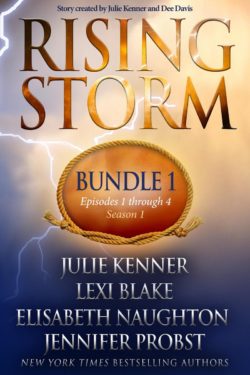