Some doors were never meant to be opened…

I made a fateful mistake. I should never have peeked behind the doors into his forbidden world.

But I did, and now I’m a prisoner. Trapped by the man I thought I loved. The man I once foolishly trusted. The man who, despite his lies and deception, I continue to crave.

He can melt my resolve with one rough, whispered demand, and I feel myself giving in to the desire he still stirs inside me. And yet, if I want to survive, I must find a way to escape. Because if I don’t, I’m afraid I’ll be consumed by a shadowy world that will ultimately destroy me.

Lost forever in his wicked House of Sin… 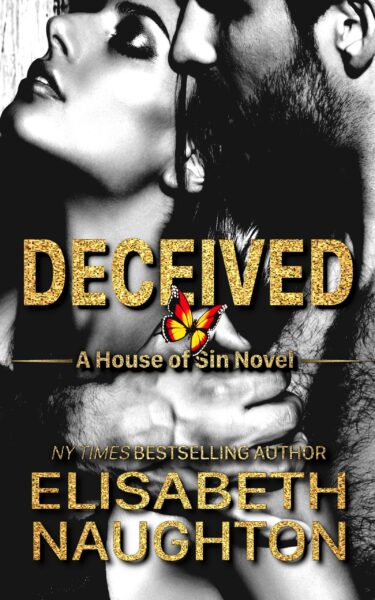 Some doors were never meant to be opened…

I made a fateful mistake. I should never have peeked behind the doors into his forbidden world.

But I did, and now I’m a prisoner. Trapped by the man I thought I loved. The man I once foolishly trusted. The man who, despite his lies and deception, I continue to crave.

He can melt my resolve with one rough, whispered demand, and I feel myself giving in to the desire he still stirs inside me. And yet, if I want to survive, I must find a way to escape. Because if I don’t, I’m afraid I’ll be consumed by a shadowy world that will ultimately destroy me.

Lost forever in his wicked House of Sin…

I was lost in a sea of darkness, unable to find my way.

Trees like gnarled hands clawed out for me. Rocks and twigs stabbed into my bare feet as I ran. The scents of dirt and moss choked my throat with each strangled breath, but I didn’t stop.

They were coming for me. Drifting closer with every step, their chanting voices growing louder in my ears, their hot breaths sliding over my skin until I trembled. Yet no matter how hard I ran, I couldn’t make my legs move faster. I couldn’t find a way out. I wrestled with the vines and limbs around me, gasped for air, but the utter blackness was all I knew. That and a sinking feeling in the bottom of my soul that told me I was trapped, never to be free again.

I blinked against the brightness. The shadows slinked away like fog rolling up the hillside in the dawn of morning’s light. Somewhere close, fabric rustled—at least I thought it was fabric—and a faint voice whispered, “She’s coming around. Go tell him.”

Footsteps sounded, then faded, and as my senses slowly righted, those words echoed in my mind.

I blinked again, straining to bring my surroundings into focus. Struggling to figure out where I was and what was going on.

My limbs were heavy. My vision blurry. I continued to blink and slowly realized something above me was turning.

A fan. I stared up at the fuzzy blades moving in a lazy circle. My unfocused gaze shifted to the right, and blurry objects came into view. A dresser and doorway leading to…I didn’t know where. I looked to my left—damn, that light was bright—and squinted against the burn in my retinas. Something green moved outside the windows—trees swaying, I realized—and a blue-green object rose in the distance, one that almost looked like a mountain.

“There you are,” a female voice said somewhere to my right, distracting me. I shifted my head and tried to focus on the young woman moving close. She was maybe a little older than my twenty-four years, dressed in a floral-print sarong and black tank, but where my hair was dark and curly, hers was blonde and straight and looked to be pulled back in a ponytail. “We thought you were going to sleep all week. Careful getting up. Your legs are probably a little weak. I’ll get you some juice and crackers. I bet you’re starving.”

She disappeared from my line of sight before I could ask who she was. Confused, I looked back at the view to my left. As my vision slowly cleared, I spotted a wide deck littered with lounge chairs holding plush red cushions. Swaying palms reached toward the cerulean sky, and a deep blue infinity pool seemed to disappear into the rippling water of the ocean or sea or…

Holy shit. My eyes shot wide open, and my heart rate rocketed into the triple digits.

I bolted upright but immediately regretted it. Pain stabbed at the front of my forehead like a thousand tiny daggers piercing my brain. Grasping both sides of my skull, I groaned and breathed hard until the waves of agony dulled to an insistent throb.

I didn’t know where I was or what was going on, but when I finally opened my eyes again, I realized I was dressed in pink cotton pajama shorts and a deep blue tank. A warm breeze blew in through an open window, telling me it was at least eighty degrees outside, which explained why I was sweating.

Lifting my aching head, I registered I was in some kind of bedroom suite, one I’d never been in before. The walls were stucco, the pitched ceiling lined with rustic wood beams, the bed beneath me gigantic, with four posters and a plush comforter, the furniture in the room teak or bamboo—I wasn’t sure which—and expensive. And that view…

My gaze strayed to my left once more, and I stared at the staggering, lush green mountains and the sea of water as my heart thumped a hard rhythm against my ribs. Where the hell was I? The Caribbean? The Bahamas? The Seychelles?

A twinge in my finger drew my gaze down. And my eyes grew even wider when I saw the ink darkening the skin on the ring finger of my left hand beneath my second knuckle.

The ink was fresh, the skin slightly red around each mark, and the entire area was covered in something shiny, like an ointment or salve. Heart pounding, I turned my hand and read the one word branded into my skin:

Shocked, I flipped my hand over and spread my fingers. The skin on the side of my ring finger was also tattooed with three small letters:

Horror shot through me. I knew of only one person with those initials. One person who had recently uttered the word slave to me.

I jolted out of the bed and pressed my trembling body against the wall. Luc had told me he’d lived in the tropics before he’d moved to New York and taken his position as CEO of his family’s fashion magazine. He hadn’t said where, but I knew instinctively that wherever he’d lived before was clearly where I was now.

I wobbled on legs that were—exactly as the woman had said—weak. Pain shot through my left calf, but I ignored it as I steadied myself against the wall. Frantically glancing around the room, I balked against the images surging in my mind. Images and visions that came out of nowhere and made no sense.

Men in black robes, standing in a circle in the woods, their haunting white bauta masks illuminated by torchlight. Me, running through my small house in Idaho and being slammed to the ground from behind. A hypodermic needle plunging into my flesh. Another man dressed in black—this time a suit, not a robe—with a book in his hand, asking me something I couldn’t understand. And Luc’s stormy gray eyes with his left, unique keyhole-shaped pupil, staring down at me while his familiar voice encouraged me to say yes. Telling me as soon as I did, everything would be okay.

Perspiration slid down my spine and dotted my forehead as I lifted my hand and stared at the vile ink branding my skin. A growing panic rose in my chest. I swallowed hard. Tried to think. Tried to rationalize. Tried to tell myself it wasn’t what I thou—

Footsteps sounded outside my door. My wide-eyed gaze shot in that direction. The door pushed inward. Then I saw Luc leaning against the doorjamb, his muscular body draped in faded jeans and a loose black T-shirt, his dark hair mussed as if he’d run his hands through it several times, his unique gray eyes as stormy and intimidating as ever.

My heart bumped, and a familiar warmth spread through my chest when I remembered this was my Luc. The man who’d taken control of my body and awakened my heart with just one touch. The man who’d rearranged every one of my priorities. The man who’d saved my life on more than one occasion.

But just as quickly I remembered he was also the man whose family was involved in multiple illicit activities throughout Europe, from drug trafficking to prostitution to even, and most horrifyingly, the creation of beta slaves—women whose sole purpose was to serve the depraved needs of the men in his House. And, I remembered, he was the man who’d followed me to Idaho after I’d run from him, who’d drugged me and, now obviously, abducted me.

His eyes locked on mine, but they weren’t the warm, familiar eyes I remembered from our steamy time together in Italy. No, the second his gaze met mine, his stormy eyes flattened in a way that told me he was not, and never had been, the man I’d foolishly let myself fall in love with.

“You’re finally awake,” he said in his clipped Italian accent. “That’s good because we have a lot to talk about, wife.”

For a heartbeat, I didn’t move. Then that word—wife—hit me like a two-by-four to the forehead, and my gaze dropped to his left hand, resting against his hip. A thick black band encircled his ring finger.

Sickness shot up my throat, and my fingers curled into the stucco at my back. “No,” I managed in a shaky voice. “You didn’t.”

But even before the words were out of my mouth, visions flickered in my mind again. Visions of the man in the black suit telling me all that was left was the paperwork. And then Luc whispering I’d done well while he wrapped his thick arm around my waist to hold me up and drew my fingers toward a crisp white paper where he urged me to sloppily sign my name next to his.

“I didn’t.” Luc’s square jaw turned to a slice of steel beneath the scruff on his skin as he straightened from the doorjamb. “We did. And I suggest you get used to it, Mrs. Salvatici, because we’re not leaving here until you do.”

Panic turned to a rage I couldn’t control, coloring everything red. He thought he could drug me, kidnap me, force me into a marriage I didn’t want, and that I’d just get used to it?

My gaze shifted to the sliding glass door at my side. And seeing my one chance for freedom, I didn’t even hesitate to reach for it.

“Natalie,” he warned in a hard voice at my back, “I wouldn’t step out that door if I were you.”

“Fuck you, Luc.” I shoved the door open and moved out into the warm tropical air.

And then I ran, exactly as I should have done the moment I met Luciano Salvatici.

Other Books in the House of Sin series
Click on the covers to read more. 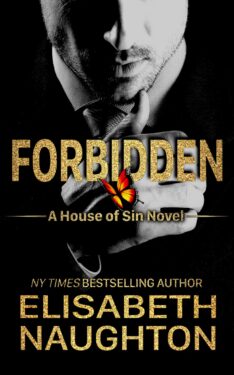 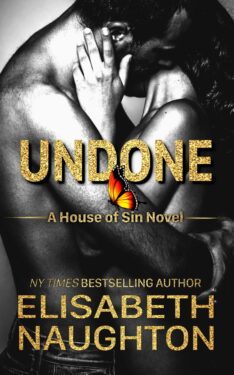 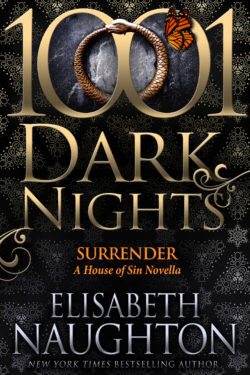